1/31/2014 - starting off the new year with some pics. Got a T3i I've been playing with. A little tougher to get the white balance right compared to the Panasonic, but I got it for astrophotography anyway.

Since I've added the Rapid LED actinic kit, I seem to have been stressing the Christmas Mirribillis SPS. It's slowly fading to white on me. It's been struggling since the last semi-crash anyway. But I ended up adding dimmers to the kit to see if that'll help. Also have turned off the Reef-Brite Pro. Looking back, I think that's when the fade started. I've also scheduled the lights differently also. Meanwhile, I made a frag and stuck it in a lower light corner and we'll if it comes back or not.

Hair algae is still around, but seems to be under control for the most part. We've also added a new tang. 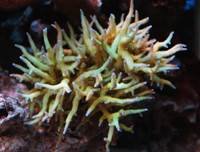