My do it yourself project for an algae turf scrubber for my 75 gallon aquarium. This page describes how to make a cheap scrubber from parts you probably having laying around.

I was trying to find a way to get rid of the bryopsis invasion in my tank - I've tried GFO, large water changes, carbon dosing (vodka and "bio pellets"), various animal life - didn't matter what I threw at it - it kept growing. So after reading a few forum threads on turf scrubbers, I decided to go this route. After all, I figured I could build one for under $20, why not try it?

3/19/11 - So after following several threads online, I decided to jump in.

Anyway, I had everything I needed except the sewing "mat", which I got from Joanns for $0.52. Cost me that much in gas to get it. So, I took some leftover PVC I had laying around and came up with the simple design below, just to see if I can get anything going.

I took out my skimmer and turned off the GFO reactor as well. I want to see if this works as advertised. I mean, with a jillion baby pods growing every week, the coral and the fish should be happy, right?

Here's some pictures of the assembly. I took a piece of 3/4" pvc and cut a 10" long slot using my rotozip. Most people use their dremel, but I don't have one. I then scrounged around and found enough parts from sprinkler and fish tank leftovers to build the "frame" you see below.
I had a pump laying around, don't know what the gph is, but we'll see what it can do once it's hooked up. I then inserted the screen into the slot and zip tied it to the pvc. When I clean, I plan on taking the whole top pvc to clean so I don't have to keep zip tying all the time.

I dropped it in, tuned it on - nice flow and quiet. I then took a shop light I had used before for growing chaeto and clipped it in as close as I could. I plan on adding a piece to the stand to get the light closer sometime soon. 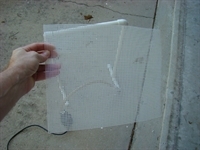 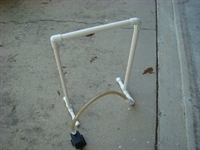 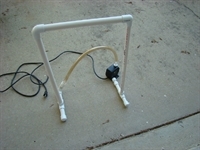 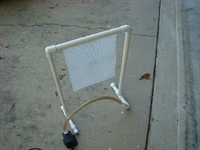 3/22/2011 - I added a second light 2 days ago. The flow still looks good. I have noticed that many of the instructions have 2 screen back to back. Next time I'm by Joanns, I get the other one. After 3 full days, I am starting to notice discoloration. Now, I may not be growing algae as fast as other guys, but my chemistry isn't that bad to start with. I took the skimmer and the RowaPhos (GFO) offline. I also fed a little heavier the last 2 days, but didn't go nuts.

3/27/11 - Here are some progress pics. I have 1 little tuft of hair algae in the tank. I grabbed a little last night a rubbed it on the screen. Maybe it'll promote growth. I do have some stringy growth already, and probably a little pod growth too - I'm seeing clean spots on the screen. I've also noticed I've only had to clean the glass twice since I've started and it wasn't nearly as bad as normal. 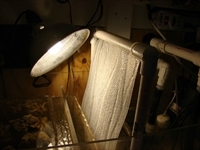 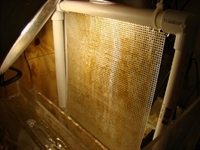 4/7/11 - I've added mounts for the lights so that they are closer and more straight-on to the algae. Hair is growing, nothing long yet, but certainly growing. Noticed a huge increase in the amount if cyano bacteria. Started doing 5 gal water changes every couple of days to suck it up. As of yesterday, I decided to re-install the skimmer and run the Rowaphos until the cyano comes under control or disapears.

I've also noticed that the bryopsis is making a comeback. during the last water change, I pulled as much as possible, hoping the combination of the scrubber and cyano would consume any available PO4 (of which is still not measurable). My new startegy is to get the scrubber growing well, keep the skimmer and Rowaphos going, pull any visible algae and do numerous small water changes until what's in the display is having trouble growing or disappears. I think I'll only remove the Rowaphos once that happens and keep the skimmer online for a while after that.

5/6/11 - We now have algae on the screen. About 2 weeks ago, it really started to take off. Now, I did put the skimmer back online. I experienced a serious cyano outbreak. I've been sucking it up every couple of days along with the bryopsis that's still growing. I'm convinced that some of my rock is leaching PO4. I'm not feeding very heavy and I have a light bioload (9 sm fish). I pulled about 1/2 cup off one side last weekend and tomorrow's harvest should be about the same. I haven't noticed any increase in pods, but I'm only cleaning the glass about every 4 or 5 days now. And it's more of a cloudy glass, not the slightest bit green like before. I also upgraded the pump to a mag 5 I had sitting around. I'm going to have to cut a few extra cross-slots to get more flow. The algae is growing up into the tube at the top.

These are from a month ago. I'll upload some new ones shortly. 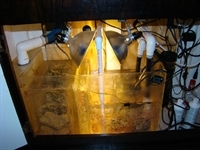 5/29/11 - The harvest has picked up quite a bit the last couple weeks. Even a found a pod or 3 in the harvest. The bryopsis is still going fairly strong, but i haven't had to clean the glass much at all. 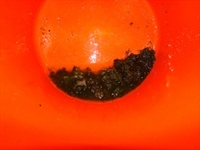 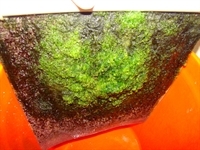 6/3/11 - After stating the harvest has picked up, now it seems to have slowed, or evened out I suppose.  Harvested about the same amount you see on the screen above. I'm starting to notice some pods in the algae now too. Still have lot's of diamtoms on the screen and the cyano seems to really have slowed in the DT. Also starting to see some hair algae grow on the screen too. I cut a new pipe this week and made some cross cuts to help with the flow a bit. Algae was growing into the pipe, so I thought I'd widen it a bit too. Now we have some great flow.

Now, I have been running filter socks the last 2 weeks since I added a new circ pump to the tank to catch any sand storms I create. I'm wondering if that had anything to do with the reduced growth? The skimmer has been producing about 3/4" skimate a week the entire time too. This week, I'm starting to doe Tech M magnesium to try to finally rid the system of the bryopsis - the other reason for the sock (catch dying algae).

I might try going back the original pump this weekend as well - the mag 5 seems to be heating my water quite a bit. I added a fan in the stand and I'm still running 81+ by the afternoon. I rarely saw that last year without the mag 5 and the fan.

9/19/2011 - My 6 month expirement with the ATS has come to en end. I cannot overcome the bryopsis and I'm going to more drastic measures. I've put the skimmer back in and removed the ATS system. I think it can work, but the scraping of the screen every week is more of a pita than cleaning the skimmer cup. I suspect that no matter how well I cleaned the screen, bits of algae seemed to be spreading throughout the system and the ATS wasn't out-competing it.

If I decide to try it again, I would go the route of a more closed system instead of the waterfall style. This way, I can get more of a 3D growth and if built correctly, can limit stray light.

Overall, I was pleased by the results of it's ability to remove PO4 and NO3. Very effective. Actually, too effective. I lost almost all my LPS and zoa growth has been limited (the zoanthids actually started shrinking). Most SPS has been great though - although some have shown signs of stress.

It's only my opinion from what I've observed, but if I had a larger tank with a lot of fish poop happening, this system would be very effective. It's easy to build, some work to maintain and considerably cheaper than GFO.


To build your own

To make your cut, I used my rotozip the first time around, but without a workbench and a vise, that was rather difficult. I used my chop saw to make my slot. Most people used a dremel to make their cuts. Research, where goggles and be careful whatever you choose. Your slot must be wider than the screen (about 3/16"). And straight!
Once your cut is made, you need to decide on how you plan on doing your weekly screen cleanings. I ended up not gluing the pvc ends to the elbows and I just popped the top tube holding the screen out from the elbows, put in a bucket to take and clean. This method allowed me to just use zip ties to secure the screen. I found inserting the screen about 1/2" into the slot worked fine. You may need to create a couple of holes if you go this route for the zip ties.
Assemble your pvc (I didn't glue anything - but that may depend on how pressure your pump creates). Don't forget to measure the width of your sump and the vertical space under your tank first.
You may want to test it in a tub or something to make sure everything is working fine before installing in your system. If all is good, put in your sump and fire it up. It will take a good week or more to start growing algae - depending on the fertlizer (no3 & po4) available in your system. You will see some funky colored stuff too - all of it consumes the nasties you trying to rid of.
Run your lights on a timer - algae needs a break from lights too. I ran mine 12 hours on - 12 hours off.
Clean weekly - this is a must. Just take to a sink a scrape it with a paint scraper, old credit card or whatever. Rinse thoroughly before re-installing back into the tank.