After about a year, it's come to the point with fighting bryopsis and hair algae, I've decided to start documenting my battle to hopefully help someone else.

Starting somewhere around late January '10, I started seeing signs of hair algae spreading. I know it had to come from the watermelon frag I got that had the bryopsis. 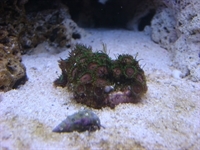 Even though I thought I had it cleared up, I noticed the rock nearest to where the frag in question used to reside started growing hair. I pulled, scrubbed, dosed carbon, wet skimmed, cut feedings, cut lighting, added granular ferric oxide (GFO), did water changes and stood on my head while picking my nose (kidding). Nothing worked.

I wish I got some pics was it was the worst, but here's a few with some "samples". 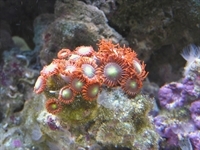 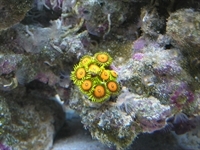 We went to China in Feb for 10 days. When I came back, we  had one extremely hairy fish tank. War on. I removed every single rock and scrubbed them out of the tank, so the spores wouldn't spread. I took one of the totes I had that wasn't clear and set up a holding tank for the worst rock. I put more than half of the rock in the tote and scrubbed them every other night or so.

I did 50% water changes twice a week on the tote. After the second one, I measured PO4 at .03 and NO3 at just under 10. So the algae was locking up quite a bit of NO3 apparently. Every est on the display tank always came up 0s. After about 3 weeks, I started rotating the rocks between the DT and the tote. It took about 6 weeks to get the upper hand. I have by no means won the war, but at least the battle so far.

By Mid April, some spots are still holding out. I think every rock has been in the tote at least once and some 2 or 3 times. It's time to step it up. I debated between fully "cooking" the rock, buying all new rock, or going the way of chemistry. After some lengthy thought, I decided on Algaefix.

I've read several forum discussions and various posts around the www and thought I would give it a try. I chose this method because I have a couple or coral frags that are now "infected". This means they cannot be "cooked" and I really don't want (or can't) frag them away from the pest.

So I picked some AlgaeFix up from PetsMart (at a stupid premium) and added the first dose on 4/12/10.

4/15/10 - Added all but one rock from the tote back to the tank (the other rock is huge and the light rack needs to come out). Scrubbed any obvious algae before putting them back in the DT. There wasn't much, but...

Added the second dose. Pulled some algae from one of zoas (the red + green one above), it didn't have much resistance - that's new. I'm continuing dosing vodka, skimming wet and running light on the sump in an opposite schedule. The chaeto in the sump isn't showing any signs of problems so far.

4/18/10 - Third dose added. Put all the rocks back in the DT and dumped the tote. I'm not seeing any growth of any significance anywhere. What HA here is, is starting to look "stringy".  Spent an hour or so this afternoon redecorating rock. Only noticed two little tufts of HA. Looking good so far. 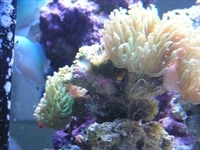 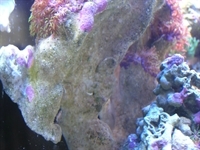 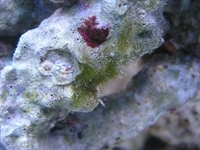 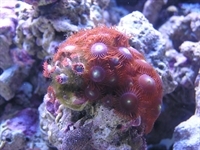 5/4/10 - Have been dosing every 3 days. Most algae is gone. there are one or 2 spots that seem to hanging on pretty tough. I'm thinking one of them might not be hair algae. The other is, and is starting to show signs of weakness.
We lost Mr. Shrimpy, I'm feeling that the algae fix may have played a role, though I can't be certain. So we got another cleaner - he was crab food by the next morning, so you decide.

I think I'm going to go down to once a week, so the snails will have food too. Many threads I've read also have issues with their chaeto dying off - I can say, ours is growing fine. Another side note - my skimmer's been going nuts. I've continued to dose vodka during the course of this, so, there may be more nutrients in the water now that the algae has beenn reduced to almost nothing. I've been testing, and everything still comes up 0s. 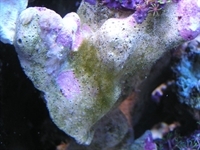 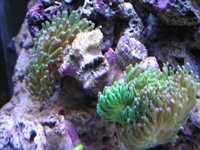 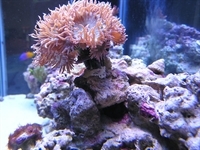 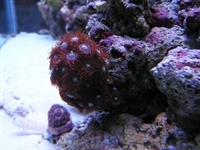 5/20/10 - Most of the algae is now gone. I'm only doing one dose per week now. There are 2 small patches holding out that are going to get hand pulled shortly. I have noticed an increase in diatoms and reddish algae on the glass. Lot's of guys that have used AlgaeFix reported the same. Nothing I can't handle though.

I did a 10% WC yesterday along with changing the rowaphos too. One thing I have noticed, is that my skimmer is producing lots of skimmate through the entire process. My chaeto is finally showing signs of deterioration as well. I've been skimming wet and dosing vodka the entire process too.

I'll post some pics soon, but overall, I would say the stuff works. My corals (even SPS) and zoas appear to be thriving, although I lost 2 shrimp and a few cone snails (lack of veggies?). I'm going to probably stop for a week or 2 and see what happens. As of today, I got 0s on PO4 & NO3. I did however seem o notice a drop in Ph. I'm down to around 8. 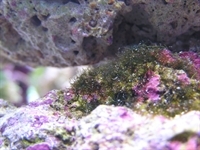 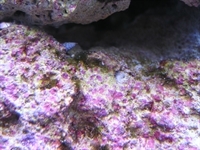 6/28/10 - Did one dose on the 20th and the algae receded quite a bit. I also grabbed the mexican turbo and placed him on it. I think that was what did the most work on it. I've been trying to keep up on dosing the vodka too.

7/10/10 - Haven't dosed since last (6/28), still seeing signs of algae here and there. There seems to be one rock in particular I'm having an issue with. When it starts getting a little length to it, I just move the turbo snail to it and he mows it down pretty good. I've gone back to dosing vodka and will be changing the rowphos soon.

Instead of going with GFO, I'm trying Vertex solid carbon. I'll be starting a page on it shortly. I started around 8/1/10. 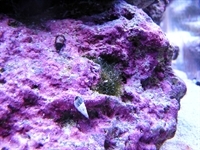 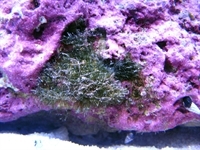 10/8/10 - I've given up the dosing for now. Didn't seem to make any progress anymore. Maybe my algae is the type that AlgaeFix works on. I know that some of it is bryopsis. I'm going the way of solid carbon (Vertex) dosing. After a few months though, I'm leaning back to Rowaphos. I've gotten 4 more turbo snails and few more astreas. Someone did eat the algae on the big rock on the end. Twice now. I'm think this rock may have some phosphate locked up in it. It's almost completely covered with coraline now though, so that'll help.

I've been pulling whatever doesn't get eaten to make it fight harder. 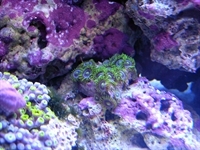 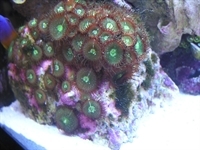 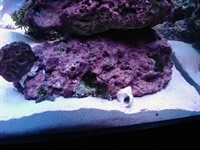 1/19/11 - I can honestly say, the only "hair" algae I appear to have is bryopsis. The hair algae appears to be defeated (for now). I'm taking the pellets offline and switching to vodka dosing, so...

3/7/11 - Some brysopsis still hanging on, a little HA in a couple of spots, but nothing big to report.

6/4/11 - The ATS (algae turf scrubber) is doing well, but I'll still fighting the bryopsis. I have a strong feeling the rock I got when I got this tank was loaded with phosphates and with the ATS pulling PO4 from the water, it's causing the PO4 to leach out faster. It mostly grows in the same spots. I'm going to try the Tech M attack in earnest starting this week.

9/19/2011 - I'm caving to the bryopsis. Tech M made a dent - until I went through a whole gallon. I'm swapping rock. I've had it with the bryopsis. Hair algae - no problem, that's what snails are for. Side note - I bought a 6k Gieseman bulb and I think really think it sent the algae growth skyward.
Found an interesting read about removal using hydrogen peroxcide - http://www.reefcentral.com/forums/showthread.php?t=2082359