My DIY Canopy Page. Build log of a do it yourself aquarium canopy to fit my 75 gallon fish tank.

I needed a canopy for my new-used (got from craigslist) 75 gallon tank. I learned much from building my own DIY stand for it. I used Google's sketchup program for many hours to come up with what I was looking for. I had used the program to do the stand and even though it took many hours of design time, it really made putting it all together extremely easier than if i did it on the fly.

I wanted a canopy that was high enough that feeding the fish would be easy, as well as doing routine and simple maintenance without having to remove it. I did lots of research on Google, looked at lots of images and decided I wanted one where the front would lift. My carpentry skills are not really good enough to do cabinets doors and I thought they might limit access anyway. I figured I should err on the side of height. Once I add lighting, I may still have a couple of inches to get my arms in, remove or add rock and whatever else. So I decided to around 9" high.

Took me a while to figure out how I was going to do the lid so that I could easily feed the fish, reach the bottom of the tank and perform and maintenance on lights and such. I ended up designing the lid to be attached to the top, which would be three pieces and get hinged (using a piano hinge) so that the front and part of the top would lift out of the way, or fold back if you will. I went this route for two reasons - to make more room to access and I wouldn't need any sort of "prop" to hold the lid open. When I open it, it'll essentially fold over and rest on the other half of the top. I hinged two of top pieces together using a piano hinge. I know it'll rust over time, but they are not that expensive or hard to replace. The third part of the top you see in the drawing below will just be a 1 x 4 that rests on the back half so it can be lifted out in case I need to get access to the back of the tank.

The canopy will be made from select pine since I used sanded plywood for the stand skin. I ended up going with 12" boards for the front and sides, two 6" and one 8" for the top. I had to cut the top rear board down to 5 1/4" to make everything fit happy. The front has a 1" x 2" that goes across the bottom to add strength and support the top, so it rests on the top of the tank as you can see in a pic below. Inside the canopy will be 1" x 2" boards to make a "groove" for the light board (I'm making retro T5 lights) to be able to rest on. I add a top so that, if I slide the board out, but don't actually take it out, it won't fall.

I bought the wood and made all my cuts. After printing out the plans in sketchup, it was just like reading an instruction sheet for something I've bought. The basic requirements other than easy access, was a "rack" for the lights which could slide back and forth and circulation fans. I cut 2 holes for 120mm computer fans that'll I'lll wire to some old cell phone chargers. I'll point one in (over the overflow for better evaporative cooling) and the other out. This will help remove heat buildup from the lamps. 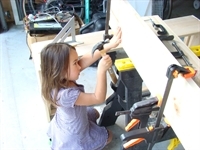 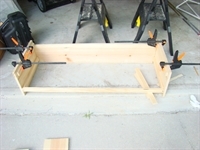 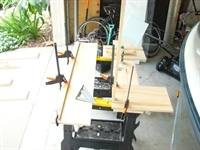 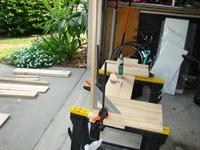 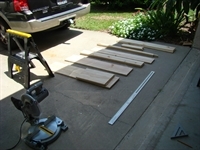 I used a piano hinge for the opening and also made the top rear 1 x 4 able to be lifted out for rear access (mainly to the overflow). 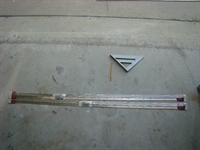 Here's some pics of it getting put together on the tank. Some sanding, staining and lot's of poly and we're done. 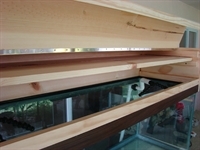 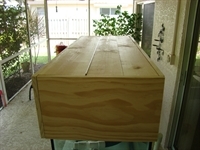 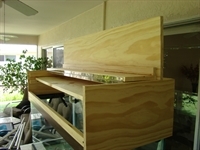