I got a 75 off of craigslist for $150, including the stand. The stand ended up being used for an emergency situation, so I needed another. Truthfully, I planned on making a new one anyway, the other looked, well, old.

I found a thread on reefcentral discussing someone building a stand and he used Google's sketchup to design it. It's a free program, so I gave it a whirl. Took about a week to really get the hang of it.

After figuring the dimensions I wanted, I decided to frame it with 2 x 4s and "skin" it with 3/4" ply. It's probably overkill to some people, but I want to sleep at night. I've added some screen shots from skethup. 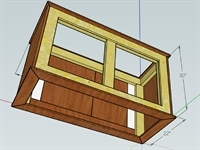 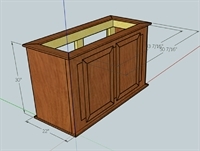 After about 2 weeks, I had the design I wanted and got the wood. That must of been the trigger, because the 50 gallon tank started leaking 2 days later.

So I started construction shortly thereafter. I got all the pieces cut from the printouts from Google Sketchup, then started to assemble. I used 2 x 4 for the core structure. 2 front and 3 back for vertical support, then headers front and back. the cross members on side were more for lateral support since they don't take any weight to the floor directly. I'm going to have to keep an eye on the front after the tank is set up to watch for sagging. I may end up adding another vertical brace. I left it out to make for ease of access into the stand since I'll be using a 30 gallon sump. 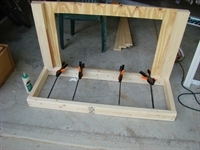 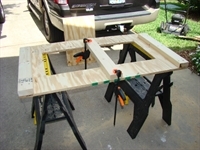 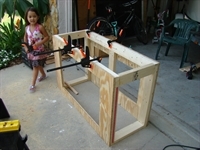 Now, I'm no wood expert, but I saw somewhere that Tightbond 3 is best for this kind of project. I used half a bottle on this stand. I think the screws are superfluous, but again, I can sleep at night :). 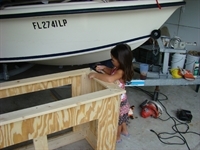 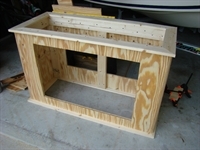 I used some 1 x 4 hard pine for the top and bottom to "spread" the load over the 2x4s and the plywood. This will also help compensate for my unevenly tiled floor. After assembly, this thing absolutely 0 wiggle. I felt I could of parked a car on it. I did discover one mistake in my design - I made the side "overhang" for the 1x4s 1/2" and the front 1". Oops. It was already glued and clamped before I noticed it. Went back and checked my design, sure enough, that's the way I designed it. This is the first time I've actually planned out something like this in such detail. It really made things so much easier.

Next thing was to paint and stain the stand. I used several coats of exterior high gloss white for the inside and then dark walnut stain. Wife likes the dark stains. It turns out the sanded plywood I got was crap. As soon as I applied the first coat of stain, the wood "splintered". Very disapointing. At least with the dark stain, it's not as noticable. 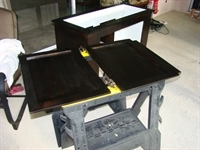 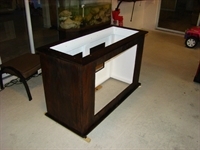 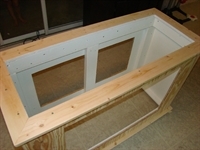 Next test was to "fit" the tank to the stand. I somehow managed not to get the top boards down very good and the tank wobbled. There was about 3/16" gap along between the tank and the stand. I found this a good excuse to invest in a belt sander. See where this is going? After 2 days of trying to level this as good as I could (and making Xiang help me list the tank on and off half a dozen times), I came across how people use foam for such things. Why didn't read this 3 days ago? Anyway, I got the top pretty close, restained it and bought some styrofoam to put between the tank and the stand.

After this was done, it was time to work on the doors. I saved the plywood I drop cut out for the front. I figured I would frame it with some 1/4" x 2" trim and offset the center cut by a couple of inches since I didn't have center brace. I cut and glued the trim, then I had to figure out how I'm going to hinge this. It took me 3 or 4 trips to the hardware stores (and got no help - thanks HD & Lowes) before I figured it out. After chiseling out spots for the hinges between the trim and the door panel, I was getting close. I added a couple of magnet catches to help keep them closed. Time to start on the canopy - see the canopy page for details. 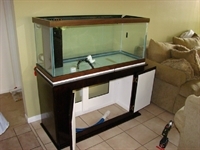 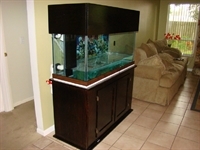 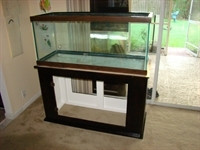 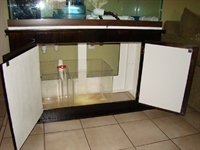