Documentation of the building of the treehouse. I wanted to build something that was not super obtrusive to my neighbors and not too terribly complicated.

After many years of the promise of building a treehouse for my daughter, I starting hearing it being used as a reference as to when I might get something done as a joke. So, I starting doing some research as to how to go about this. The wall I kept running into was how to attach it to a tree that was not exactly vertical. And keep it in the tree.

I finally stumbled across someone mentioning using straps, and that gave me the idea to bolt straps and hang the "starting" boards from the straps and deck it from there. So, I went to the box store and picked up some 6" 3/8" bolts and straps (rafter?). I didn't see any that from fit a 2x, so I envisioned wrapping it under and back up to the board. Once I accomplished that, I tried to square up a couple of 2x4s and then attach 4 six foot 2x4s perpendicularly to build out a 6' x 6' deck. I mounted the deck boards using different joist straps to allow for motion. After all, here in Florida we get some pretty strong gusts from our afternoon storms. 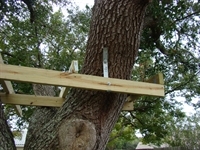 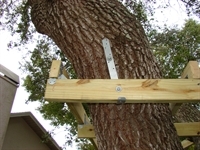 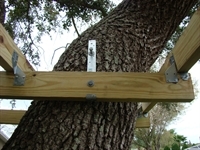 Doing this 8' off the ground on a ladder with a bad knee, I actually managed to come out only 1" off square. The next step I decided that it looked too precarious hanging from the tree and decided to add a couple of 4x4s on the non suported corners. It made me feel alot better about my daughter being up in it. I added 45 degree cross support to these later as well. 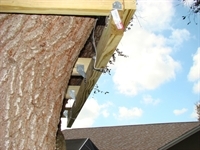 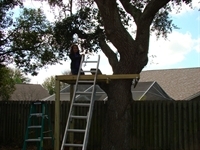 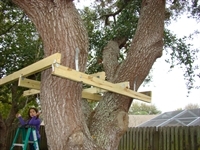 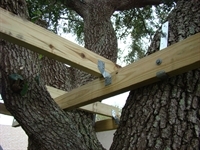 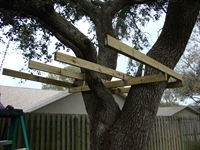 Next, I took some 3/4" plywood I had to make the deck. Since I decided to leave a branch coming up through the floor, I cut it in 3 pieces, so it would be easier to put up at that height. 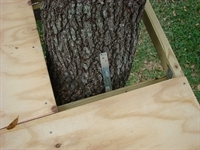 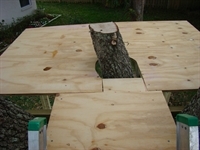 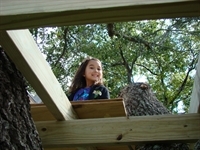 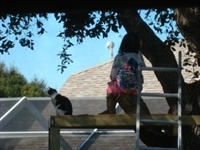 Ladder time. I thought for some reasonn 2x3s would make a good ladder. They don't. Cheap, crappy wood. The second ladder was a 10 foot 2x4, laid with the boards flat and the steps cut 16" also laid flat and screwed in. Adter screwing the the deck, I cut pieces for the bottom to brace it against the tree so it's very sturdy. 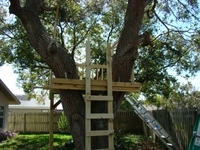 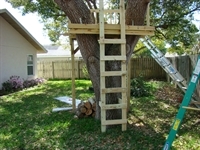 As for the railing, I envisioned using banisters, with the corners being 2x4s bolted through the deck support, also to support the roof. 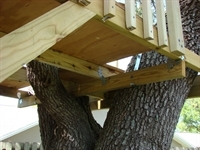 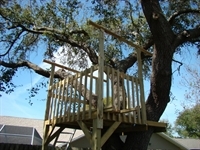 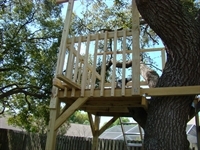 i found the roof to probably be the trickiest part to figure out and assemble. I didn't really want to be lifting plywood that far off the ground, or using shingles for that matter. I stumbled across the plastic/viybl corrigated sheets i the back of the store and thought that they would be perfect - they're waterproof and lightweight. To attach them, I got some stainless screws with the curvy type of washers (so that they won't tear through). They were 8 foot by 24 inches. I left room for a foot overhang on each end. Last one was tricky and glad I had a 16' ladder, which was still a quite a reach. 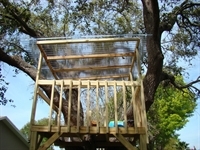 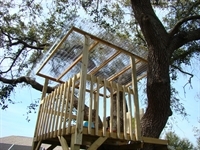 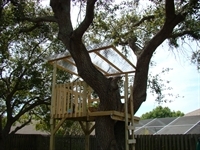 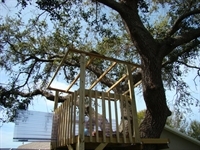